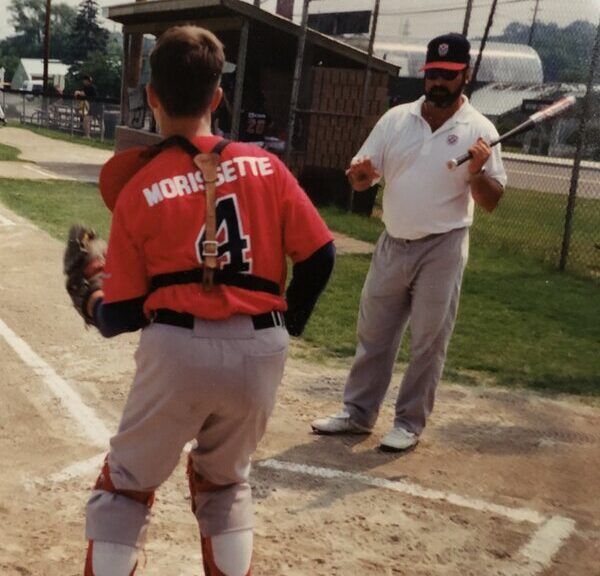 “Love is the most important thing in the world, but baseball is pretty good, too.”

My Little League Coach from 1994, Lou Nistico, passed away suddenly on November 27 and I wanted to write about his influence on a 12-year-old kid who loved nothing more than competing with his friends on sandlots in the Ottawa area, enjoying a game that would shape my future.

I’m extremely fortunate to make my living today working in the game of baseball and having people like Lou who helped me foster a love for the sport through their own passion and love for the game.

Since his passing, many tributes, and rightfully so, detailing Lou’s contributions to the hockey world have poured in, including a tweet from current Toronto Maple Leafs coach Sheldon Keefe from their time in the Central Canada Hockey League (CCHL) together.

But I’m writing today to explain Lou’s ties to the baseball community here in Ottawa and his influence on dozens of players, including me, in Ottawa’s east-end, Orleans, in the 1990s.

A huge fan of the New York Yankees, Lou represented Canada for his hometown of Thunder Bay, Ont., at the Big League World Series in Fort Lauderdale, Fla., in 1970, just days before reporting to the London Knights training camp for his rookie season in the Ontario Hockey Association.

Lou went on to an extremely successful junior hockey career with the Knights, becoming a crowd favourite where he earned the nickname “Leapin’ Lou.”

After a pro hockey career that included 186 games in the World Hockey Association and three games with the NHL’s Colorado Rockies in 1977-78, Lou settled in Ottawa with his family in 1984 where he began to lay roots in the region that he called home for the last 36 years.

With hockey taking precedent for Lou and son Justin with one of the most successful minor hockey teams in Ottawa’s history, the Cumberland Barons “79” squad in the winter months, the Nistico’s turned their attention towards baseball in the summers with a program on the rise, the Orleans Little League Red Sox.

After Justin and the Red Sox “Major All-Stars” brought Orleans its first provincial championship and subsequent Canadian championship appearance in 1990 (won by future MLB All-Star Jason Bay and Trail, BC) Lou took over the 11-and-12 year-old squad in 1991 and so began a string of six consecutive District 6 championships for Orleans that included three straight appearances in the Ontario final from 1992 to 1994 with an Ontario championship in 1993.

Justin moved on from the Major division after the ‘91 season, but Lou kept on coaching other people’s kids because he loved it and they loved him for it. He loved being around the game, the families that came with it and teaching life lessons through baseball like hard work, commitment, what it meant to work towards a goal, competing, failing and learning from those failures. But most of all, he taught us to have fun, respect your teammates, coaches and respect the game itself. Because at the end of the day, that’s what baseball was and always should be for a 12-year-old, just a game.

The season before I made the Major Red Sox, Lou led the squad to an Ontario championship on home soil at Gardenway Park in Orleans in 1993 where they defeated LaSalle Turtle Club in front of hundreds of local fans. I knew right then and there where I wanted to be the next summer.

Did I mention that Lou was scared of flying? He drove the entire 10 plus hours to the Canadian championships in Saint John, N.B., from Ottawa that summer while the rest of the squad flew.

It was an all-star team on the field in ‘93 and they had an all-star coaching staff to go with it including former Ottawa 67’s star and NHL’er Peter Lee handling the assistant coach duties while Lou was the manager. Imagine having two former pro hockey players as your Little League coaches? Amazing!

The squad got out to a 3-0 record in Saint John but lost its last two round robin games to finish third while a team from Lynn Valley, BC won the national crown and represented Canada in Williamsport at the Little League World Series.

Orleans was led on the field in ‘93 by future Los Angeles Dodgers’ draft pick (selected by legendary Canadian scout Claude Pelletier in 1998) Marc-André Lagacé who took the ball every second game (pitch count restrictions were virtually non-existent in those days) and overpowered hitters from the left side while swinging a mean stick as the Red Sox three-hole hitter.

I knew I stood a good chance of making the all-star squad in 1994 and indoor workouts started in school gyms during the winter months before we hit the field at the beginning of May.

If you didn’t know Lou and were a young hopeful to play for him, you were intimidated by the man who had a presence when he came to the ballpark. I quickly learned that it was all business when we were on the field with Lou and if he didn’t like something he would let you know about, in fact, he’d likely let everyone know about it, parents and whoever else was in earshot included!

But behind the rough exterior was a man who cared deeply about all his players. He believed in outworking your competition, repetition and being prepared for your opponents.

We were the envy of other teams in the city with legit, button-up jerseys (a rarity at the time!) and all of the top-of-the-line equipment including brand-new, white Louisville TPX bats that Lou bought himself prior to the season.

We had a swagger to us knowing that we could win every game we played and reeled off 44 wins and just 4 losses that summer.

We backed that attitude up with hard work and that was a direct result of Lou’s commitment to us and our commitment to him and the team. We practised from 9 a.m. to noon everyday at Gardenway Park and often played games in the evenings. When Lou’s van rolled up to the field for practice, players would sprint to the vehicle to unload equipment or the whole team would be running laps before a ball was taken out of the bag.

When we faced Marco Disalvo from Canterbury Little League and his 70 mph fastball in the District championships, Lou brought in a 19-year-old to throw us heaters for batting practice from the 46 foot Little League pitching distance. We were playing for keeps because Lou was and we were having a blast doing it.

We breezed through the district playdowns that year with my best buddy Mark Bunker dominating at the plate and on the mound while I caught all of our games. Our team was tight, best buddies who spent days and weeks at a time together.

It was off to Dundas, Ont., for the Ontario championships where it was a three-headed monster of Orleans, LaSalle Turtle Club featuring one-time Junior National Team player and future Baltimore Orioles draft pick Ryan Brnardic, and Toronto’s High Park who had future pro and Canadian Olympian Jonathan Lockwood as their ace. In fact, Lockwood had dominated us two seasons prior in leading High Park to the Ontario Minor (9/10) crown.

Lou had us ready and made sure all of the players were comfortable with our billet families before the tournament started. We hit BP on a backfield before each game and walked over to the game field as a team ready for action.

I can still recall pregame in-and-outs where Lou was a surgeon with the fungo bat, never missing while hitting lasers to infielders in setting a tone for our team as the ball zipped around the field for 10 minutes.

He had us ready and we responded after an early tournament loss to Brnardic and the Turtle Club by coming through the “losers” bracket in the double elimination tournament to face High Park and the task of beating them twice.

Lou kept our focus. I know it’s a cliché, but one win at a time, one pitch at a time was what he stressed. When all of our parents were literally pulling their hair out in the stands each game, it was Lou who guided us with a calm hand, never letting the moment get too big in front of us.

Bunker pitched masterfully in the first game of the final as we squeaked out a 4-3 win to force the deciding game but it was Lockwood who dominated that contest as High Park took the Ontario crown in a one-sided victory.

We were broken as kids, but it was Lou and our assistant coach and fellow Thunder Bay native Lyle Stencer who kept things light, because, as you know, it’s just a game.

Lou went on to coach the Major Red Sox for two more seasons that included two more trips to the Ontario championships before ending his Orleans Little League coaching career with the Junior (13 year old) Red Sox in 1997.

A family man, you’d have to think that Lou’s favourite memory in baseball took place at that Junior age group in 1992 when as a parent he watched son Justin win a national championship at home in Orleans when they took down powerhouse Glace Bay, N.S., the previous year’s representative in Williamsport, for the Canadian title and a trip to the Junior Little League World Series in Taylor, Mich. Orleans Little League’s first national title was led by another local coaching legend in the late Louis Riopelle while an undersized left-hander named Erik Bédard pitched beyond his years on the mound.

I lost touch with Lou over time but ran into him a couple years ago at a local hockey rink where he was scouting and I was bringing my then six-year-old to hockey lessons. He didn’t recognize me at first (it had been over 20 years!), but after saying my name it quickly became old times with Lou asking what I was up to while also asking how my family and parents were doing.

I’m sure I speak on behalf of many former Orleans Little Leaguers and their families as I offer my condolences to Lou’s kids Lori-Anne, Justin and Niki along with his eight grandchildren, according to many his pride and joy.

Now that I’m a parent and youth sports coach myself, I realize that it’s not the wins and losses that matter, it’s the memories, the life skills learned and most importantly the people you meet along the way that matter most. Lou was one of those key influencers in my childhood and I hope I can pay him back by being that person to someone else.

'Home of the Red Sox'

We can't wait to see Canada's best young baseball talent on our field in September! 🏟

Thank you @BlueJays for choosing the home of the Titans! 🤝

FUN for the whole family - All for a good cause!

Multiple #ollb teams enjoying playing at the Scott Tokessy tournament. Always a great tournament for a great cause!!